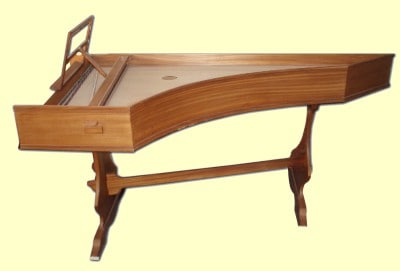 This is a soundbank of a harpsichord copied after an anonymous 17th century italian instrument. It has one manual, two 8′ stops, plus a lute stop. It is suitable to play Renaissance and 17th century music.
This soundbank is available in Kontakt 2 format, in its full version, and in sf2 format, but without release samples.

The keyboard of a harpsichord is not touch sensitive (dynamic), and sounds at the same level whatever you press the keys, but it seems that it is impossible to obtain this with the soundfont format… To avoid dynamic differences and respect the original instrument, you can adjust velocity in your sequencer in a way that the volume is constantly the highest… The Kontakt 2 version does not need this.

This bank has been created according to the following aims : we tried to produce the best soundbank possible, without any concession, i.e. without any consideration of size.

According to this, we have one sample for each note, and it lasts as long as the sound is audible : the files last between 5 et 15 seconds, without adding the release samples. The total sound bank weighs 275 Mb in Kontakt format, and 228 Mb in sf2.

You may find this recording too dry, not reverberated enough. It is a deliberate choice, because we want this bank to be used in many contexts, mainly in a sequencer. So, it is possible to modify its sound, and add some reverberation or other effects, exactly as the user likes, what would have been impossible with a less neutral sound (for ex : church or concert hall).

The harpsichord has been tuned to A 415 Hz and to equal temperament. But, in order to make it easier to use with most of modern instruments (in a sequencer for example), we transposed a semi-tone, to get a 440 Hz tuned harpsichord. So you can play it in your compositions without problem.